Photoshop offers many excellent methods for correcting casts. But if you can’t work out what they are, how can you fix them?

The first and most important step is to familiarise yourself with the Colour Wheel: 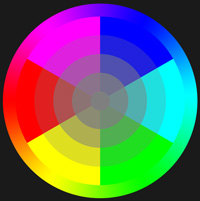 Study that colour wheel, learn it, make one of your own and pin it up on your wall if you have to. It’s a great tool.

When you look at a photo, or part of a photo, and say "There’s something wrong with the colour", then you need to be able to do two things:

Some casts are easy to identify, others are harder. To make it simpler, let’s discuss the two types of cast – cast in neutrals, and cast in colours.

Cast in neutrals is generally global cast, and that’s addressed by white balance. If you shoot Raw, you should be fixing white balance in your Raw converter, and the problem should rarely reach Photoshop at all.

If you can see something in your photo that should be white or grey, but isn’t, then you’ve got yourself a neutral cast. Cast in neutrals is fixed by subtracting the problem colour, adding the opposite colour, or occasionally by desaturating.

Global casts, and even localised casts in neutrals, can almost always be summarised as either "too warm" or "too cool". That’s a pretty broad generalisation, but it should help you a great deal. Use a Photo Filter adjustment layer and try the Warming filters (if your photo is too cool) or the Cooling filters (if too warm).

It’s pretty easy to spot casts in neutrals, because our feeble eyes and brains have a pretty good idea of what grey is supposed to look like, thanks to Adobe assisting us with all the other grey on the screen (palettes etc).

Identifying casts in colours is tougher, particularly because they usually only occur in small areas here and there. If you’re having trouble, here’s a couple of things to keep in mind …

(a) The six colours in the Colour Wheel tend to fall into three "cast groups" – Red/Magenta, Blue/Cyan, and Yellow/Green. How is this helpful? Well, if you think a cast is yellow, for example, but fixing yellow isn’t working, the real cast is probably the other colour in the "cast group" – ie green. Likewise, when you think there’s a red cast, it’s often actually magenta, and when you think there’s a blue cast, it might be cyan instead.

(c) A colour can’t have its own cast. Well, that sounds like commonsense, doesn’t it? Can a blue sky have a blue cast? Of course not. Can green grass have a green cast? Of course not. But for some reason many people complain "my skintones have a red cast". That’s impossible, because skintones are red. See the previous point.

(d) Dull colour is a form of cast, but often its correction is as simple as adding some saturation. Don’t try to over-engineer it – if the colours are correct, just a bit lifeless, then boost them up!

Like everything about digital imaging, don’t expect to learn this overnight – it takes patience and practice.

If you have a question about this article, please feel free to post it in Ask Damien.